When evening came, his disciples went down to the lake, got into a boat, and started across the lake to Capernaum. It was now dark, and Jesus had not yet come to them. The lake became rough because a strong wind was blowing. When they had rowed about three or four miles, they saw Jesus walking on the lake and coming near the boat, and they were terrified. But he said to them, ‘It is I; do not be afraid.’ Then they wanted to take him into the boat, and immediately the boat reached the land towards which they were going.

The next day the crowd that had stayed on the other side of the lake saw that there had been only one boat there. They also saw that Jesus had not got into the boat with his disciples, but that his disciples had gone away alone. Then some boats from Tiberias came near the place where they had eaten the bread after the Lord had given thanks. So when the crowd saw that neither Jesus nor his disciples were there, they themselves got into the boats and went to Capernaum looking for Jesus.

When they found him on the other side of the lake, they said to him, ‘Rabbi, when did you come here?’ Jesus answered them, ‘Very truly, I tell you, you are looking for me, not because you saw signs, but because you ate your fill of the loaves. Do not work for the food that perishes, but for the food that endures for eternal life, which the Son of Man will give you. For it is on him that God the Father has set his seal.’

I wasn’t looking for Jesus but I found him in a coffee shop in Santa Fe, NM. My husband Terry and I were in town for a workshop one chilly October. Escaping the cold one evening, we took refuge in this shop on the square. We ordered our cocoa and turned to sit down. That was when I noticed a tiny, elderly woman sitting quietly at one of the tables. What appeared to be all her belongings were gathered in a sack beside her. Clearly the employees were giving this homeless woman the opportunity to get some relief from the elements.

Her weather-beaten face was a leathery brown. But her eyes were bright, penetrating. I was riveted on her gaze. She seemed to look into my soul and see my deepest inner self. Words fail to describe the mysterious sense of connection I felt. Terry appeared to be experiencing something of the same thing. I watched him, as though in a slow motion film, walk slowly over to this magnetizing figure, wordlessly handing her a 20 dollar bill. She nodded in a gesture of gratitude.

When Terry and I left, we turned to each other in wonder. What had we just encountered?…….Certainly a spiritual serendipity….”Jesus with skin on” you might say. 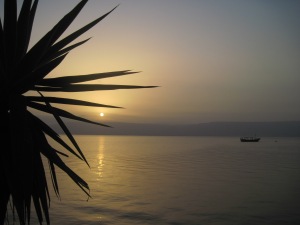 The disciples in this passage could well have benefitted from an openness to “spiritual serendipity.” Jesus came to the disciples in a way they didn’t expect and they were terrified. The crowd, who pondered how Jesus got there when he clearly hadn’t gone in the boat with the disciples, are many of the same folks who only the day before had participated in a rather miraculous experience when five thousand were fed. You might think their response to Jesus’ arrival would have been affirmation of what they had already recognized about him. “He is a prophet!” they had declared the previous day.

Yet I cannot fault the disciples or the crowd. I can claim the experience in the coffee shop in Santa Fe because I happened to be tuned in and, truthfully, it was an unusually dramatic encounter. Yet every day I have opportunities to encounter Jesus, some so small and ordinary they are easily ignored.

How many times I must have overlooked those openings, how many blessings I must have missed because I was wrapped in fear or worry, like the disciples; or I was expecting Jesus to arrive in a different way; or—worse—as is too often the case, I simply wasn’t looking for Jesus at all.

Dear God, may we recognize you in the many forms you take and the
many ways you touch our lives. Amen.